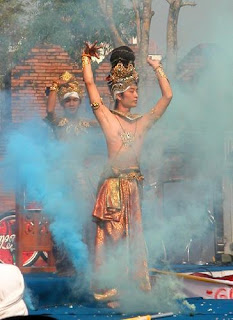 Sawatdee (Hello in Thai) to everyone as I hope to see you this weekend at the 6th Annual Thai New Year Songkran Festival on Sunday, April 5, 2009 from 10am-7pm.

While Thai New Year is usually celebrated by gently dousing friends and family with water to wash away anything bad, in Thailand, Songkran has become a tradition where even strangers are hosed down and drenched from buckets full of water since April is also the hottest month in Thailand. Sadly, we won’t be reviving that custom in Los Angeles since the last thing the City would want is to have a bunch of people running around Hollywood Blvd with waterguns and water balloons.

Nonetheless, feel free to come to the local Songkran festival and browse the numerous merchants who will be lined up on the street, feast on some Pad Thai and take a sip of your Thai Iced Tea for a refreshing drink.

Take in some local Thai entertainment and watch as Thai kick boxers (Muay Thai) battle it out in the ring. Local Thai girls will compete for the title of Miss Thai New Year 2009 and if you arrive early enough at 8am, you can watch the Thai Town 5K Marathon come to an end. If you are a curry fanatic than join in on the Curry King celebrations, curry king? Why not, right?

For Thai beer lovers, the Singha Beer Garden is back once again. So if it’s another hot LA day, refresh yourself with some Thai beer and take in the sights.

Hollywood Blvd. will be blocked off between Western and Normandy, the cost is free to attend, park at 5955 Hollywood Blvd. Los Angeles, 90082. The local Kaiser Permanente also offers parking with a shuttle service to the event site.

So come this Sunday and immerse yourself in Thai culture. Mingle amongst the Thai people and the crowd who have come to the Songkran festival. Learn some new Thai words and if you’ve never been to Thailand, this day is reminiscent of walking down the streets and seeing the vendors in Bangkok.

If you do happen to make it to Thailand one day for a real Songkran festival, don’t forget to wear clothes you don’t care about and if you get doused with water…don’t say I didn’t warn you!

Your S(cout) on the Town