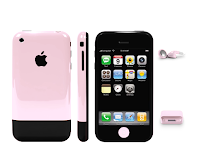 Now don’t get me wrong, this isn’t a go out and buy yourself a new iPhone kind of blog, but it’s more of a dedication to my favorite piece of technology. As you all know from M.’s post about What We Want for Christmas, I drop my phone ALL the time – I swear it’s either I’m a bigger clutz than I thought, or I just try to do and carry too many things at one time.

Over and over again, I have dropped my iPhone on the tile in my kitchen, the grocery store floor, down my work staircase…you name it, I’ve dropped it there…but my phone must know how much I rely on it because it never breaks…until one day. I must have dropped it right on a rock, but as I was pulling money out of the atm, BOOM! There goes my phone. Down to the floor, I pick it up like usual, but this time – it’s completely cracked. Of course it’s like a wounded family member to me so I rush it over to the Apple store to see if there is some sort of case I can get (Yes, you would think I would have a case since I am the one who drops it on a daily basis but I did not, nor do I now). Anyway, long story, the lady at the front says there is nothing they can do and it’s going to just stop working within the next couple days…That was 6 months ago and the little guy is still chugging along! I thought I had a fighter then, but this week I now know it’s true!
M. and I were expecting something pretty exciting in the mail – she sent me an IM letting me know she received hers and told me to run to the mailbox…so I did. In all the excitement, I must have forgotten my cell phone was in my sweatshirt pocket and in the pouring rain, I must have dropped it while literally running to the mailbox. Two hours later and a top to bottom search of my house, I walk outside to see if my missing cell phone is there…Sitting on the sidewalk in a huge puddle of rain was my iPhone – I knew it was the day I was going to have to say goodbye. I picked it up, ran inside and put the hairdryer on it…It’s safe to say that 5 days later, the little man is still going strong.
So although the iPhone has it’s flaws, the construction of the phone is not one of them! As a planner who constantly needs to check email, the weather prior to an event, check the calculations of a bill and just plain answer the phone, my iPhone is my number one meeting planning tool! 🙂

What can’t you live without?