America watched as The Bachelor‘s Sean Lowe married Catherine Giudici in this year’s bachelor wedding. The Four Seasons Resort The Biltmore Santa Barbara sparkled with florals and crystals. Appealing to Catherine’s need for “Grown Sexy”, and avoiding any similarities to a typical “rose ceremony”, the ceremony was decked out in a romantic glow of golds and ivories. From a stunning ceremony to a gorgeous reception with separate lounge and deejay areas, guests admired the day’s special touches. Both Catherine and Sean’s nephews were ring bearers and Catherine’s niece was the flower girl. It was so precious to see them both want to incorporate their family into their, very public, ceremony. Sean also insisted they recite personally written vows, which were sweet and touched the hearts of all who watched along. We loved the fact the Sean’s dad officiated the ceremony; what a special moment for their entire family!

The reception menu was up to the hotel, but the couple did have a say in their cakes. Sean even had a custom groom’s cake, made by none other than Duff Goldman‘s Charm City Cakes, in the likeness of their two dogs! The reception was relaxed in comparison to the ceremony and was more of a big party, just as Catherine wanted. The couple was surrounded by their family and closest friends, including past Bachelor and Bachelorette couples Jason and Molly Mesnick, Ashley Hebert and J.P. Rosenbaum, Trista and Ryan Sutter, andthe latest couple to get engaged, Desiree Hartsock and Chris Siegfried. From beginning to end, the day embodied the sexy feel that Catherine desired. We’re sure they had a fantastic day, just as every couple deserves!

Our favorite moments of the wedding: the rose petal cannon, Sean’s emotional walk down the aisle after being announced Mr. and Mrs, the unique lounge seating for the ceremony byRevelry Event Designers, and who could forget the glam aisle runner by Original Runners.

What was your favorite part of the bachelor wedding? 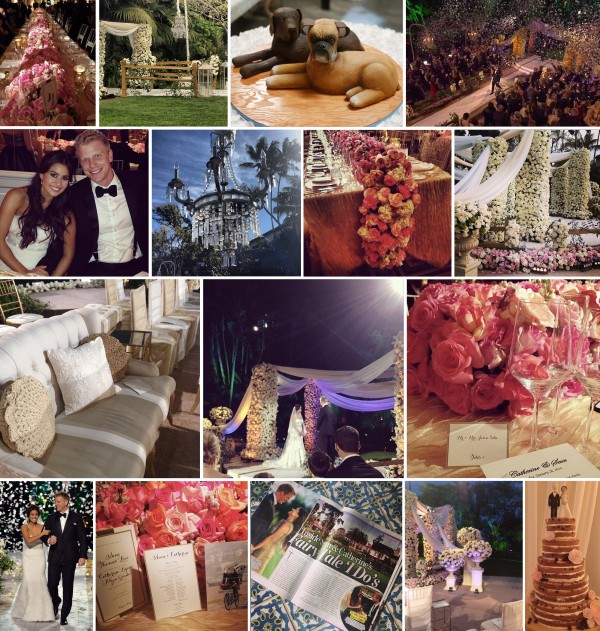