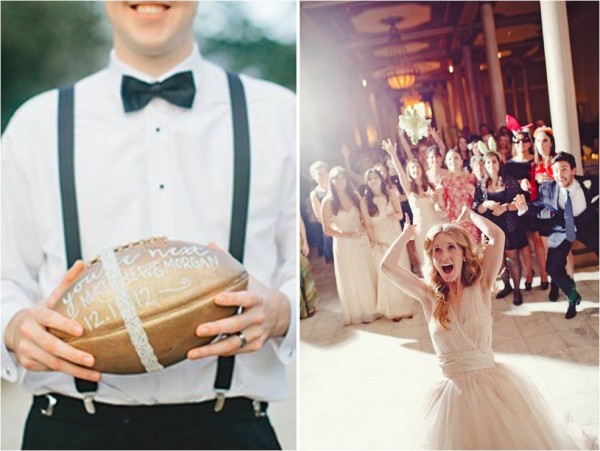 Bouquet Toss: In medieval Europe, the bride was not expected to keep her wedding dress, and receiving a piece of the dress was considered good luck for other women. After the wedding the single women would chase after the bride and rip her dress from her body, and as time progressed, dresses became more expensive and something to be kept as a memento. In order to prevent guests from tearing the dress, the bride began to throw items to keep them sated and distracted. And thus we have the bouquet toss!

Garter Toss: In later times, the bride and groom had to have proof of the consummation of their wedding – in order to do this, family and friends would come into the room to witness the act. When in the room, they would steal undergarments for good luck; in order to get the on-lookers out of the room the groom would toss the garter out the door! Moving from the bedroom to the reception – catching the garter is still considered good luck for future marriage.

Thank goodness some traditions dont carry on in earnest! 🙂